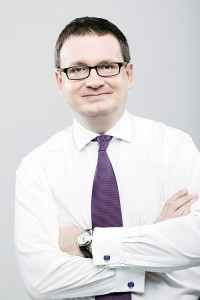 Jacek joined Arthur Andersen Warsaw in 1991 where he managed major acquisition processes and participated in various due diligence projects. In 1995, he moved to the Bank Austria Group’s subsidiary in Poland – IB Austria Financial Advisor – as a project manager, and developed the group’s successful strategy focusing on corporate finance, M&A and private transactions for mid-sized Polish companies.

In 1997, following the unit’s purchased by Erste Bank, Jacek was appointed to the Management Board. He then moved in 1998 to Baring Private Equity Partners (BPEP) and its €86 million BCEF fund where he led the Fund’s largest investment and took an active role with portfolio companies in Poland and the region. In 2004 he and his partners bought out the former BPEP Central European business. In 2005 when the business was sold to SGAM, Jacek headed the firm’s Warsaw office. He was a member of the BCEF and SGAM Eastern Europe investment committees. After SGAM’s transformation into Amundi, Jacek, together with Bill and Piotr was one of the three founding partners of V4C. Jacek is a member of the V4C investment committee, responsible for investment and divestment decisions as well as portfolio supervision.

Jacek was the President of the Polish Private Equity Association from 2005 to 2010 and was Vice-Chairman of the investment committee of Krajowy Fundusz Kapitałowy, a government venture programme. He was a member of the Supervisory Board of publicly listed companies.