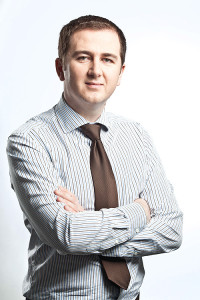 Bogdan brings to V4C seven years of experience in leading international professional services firms, both as an auditor and in transaction services. He joined V4C in April 2012.

After university, Bogdan joined Deloitte’s audit practice in Bucharest, quickly advancing as part of teams auditing the Romanian subsidiaries of leading multinationals. In 2007 he moved to Ernst&Young as a Senior Consultant in the Transaction Advisory department. Advancing to Manager, he was exposed to the broad spectrum of transaction related matters and industries in Romania. Within the practise, his focus increasingly moved to Business Plan development and review, valuation and ultimately M&A.

At V4C Bogdan is involved in deal origination, execution, and portfolio monitoring and development.